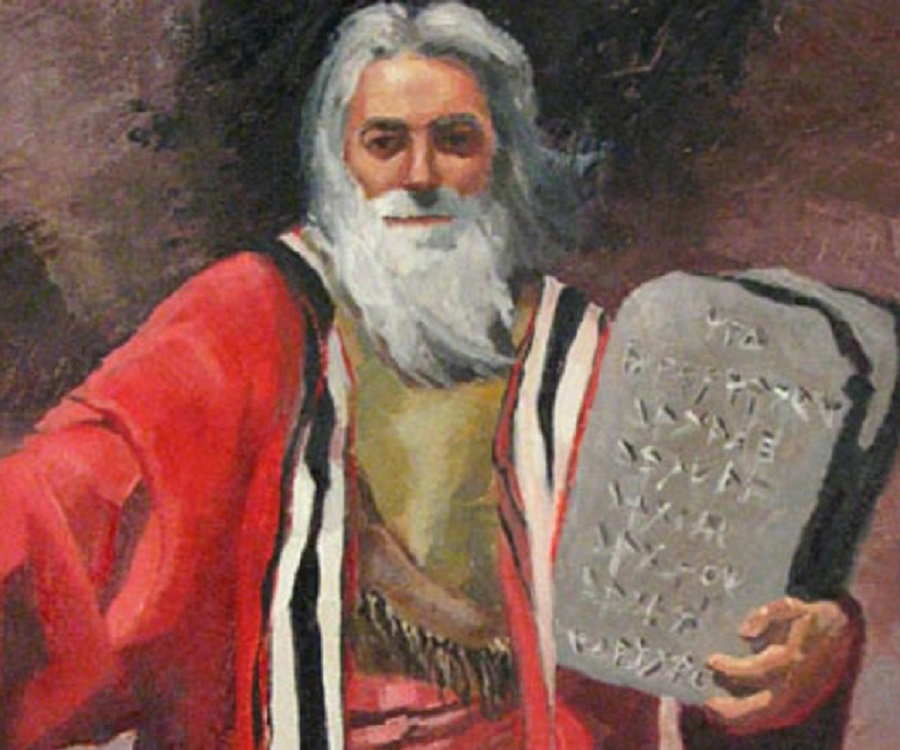 The Torah is first and foremost a recollection of the Jewish historical memory. It is the laws we lived, the legends we shared and names we understood and understand. It is often said that all legends have a true core. I do not know all legends, but let me try to get to the core of Moses (Mosheh  מֹשֶׁה in Hebrew, Musa in Arabic).

As I have pointed out last week, the ten commandments are a reformation. The thicket of the laws as they developed by judging disputes between members of the tribe became dense. The Torah mentions (in Exodus 18) how this came to be.

Jitros came from the land of Midian to visit his son-in-law Moses. He sees how the prophet spends his entire day judging conflicts between his people and asks him to stop it. He suggests that every ten should have a judge to rule between them, every fifty should have a judge to deal with the cases between them, and every hundred and every thousand should also have a leading judge.

Instead of judging every case, the leader appoints representatives who he trusts will rule according to standards that he would agree with. As smart as it sounds, this creates a lot of standards and a sense of unfairness. Why is this neighbourhood asked to live by this rule and the other by another one when the only thing that divides them is the appointed judge? What happened was that the rule by which a case was judged got written down and other judges only deviated from the precedents when a case demanded a new rule.

Naturally, the rule book grew and grew and there was no institution like a parliament that could override the mess. There are laws mentioned in the Bible that make no sense, never made sense, remind us of nothing and were most likely produced by vicious conflicts, weaponized courts and corrupt judges. Eventually the laws of old were seen as sanctimonious and G-d-given.

Because of the tight mix between civil law and ritual practices, it needed an authority to clear the books. No leader could have overturned the age-old ways and delegitimize his predecessors. Moses was certainly not the man who both set up the judicial system which produced all the tight regulations and the one who lifted up the ten commandments like the Torah says. His name is, however, most strongly associated with the ten commandments (and the exodus – more to that later).

Interestingly, one of the major rules is not to use G-d’s name in vain. Moses felt that he had a strong reason to speak in his name to legitimate the new order. But how did he do it? In antiquity one would claim to represent a god’s will by saying that he spoke to you in person when nobody else could have heard it. Torah sets the story on the Mount Sinai. The location, however, is not relevant. Moses runs into a fire and asks nobody to follow him. He carries two slates with him with the new law engraved – probably hidden under his clothes, tight to the upper body. According to the Torah he disappears for quite some time and his people had doubts about his return.

The Bible fiddles in the story of the golden calf. Because they thought, leader and law were dead, they cast a god, whored, and celebrated. It most certainly did not happen, but you must admit that it is funny as hell!

Moses returns with the slates. And why slates? They were public displays. Rome and multiple Greek cities also had such public stones with laws. Torah adds a number of lesser laws right after the ten commandments and claims that they were also spoken to Moses. This shows how intense the conflict was. If G-d had considered all laws that important, Moses would have carried scrolls. I simplified the matter so far. The ten commandments did not have the power to clear the books, but you will notice that a significant number of them no longer bore actual penalties. That looks a lot like a compromise to me.

At some point the slates broke. According to the Bible, Moses smashed them when he saw the golden calf. As I mentioned before, the whoring and celebrating thing makes no sense, but there is another interesting aspect of this story that I just want to wedge in: There are two golden calf stories. In the first version (Exodus 32:7) G-d wants to destroy the partying Israelites and Moses calms him down. In the second one (Exodus 32:15) Moses gets surprised, boils with anger, asks who was still with the Lord and lets them kill their “brothers, friends and neighbours.” This is most likely a philosophical episode about absolute devotion. The Bible is full of stories with competing versions and much of the fun reading the Holy Book is to figure out what belongs to what.

Anyway, the slates did break. To prevent this from happening again, a copy of them were placed into the ark of the covenant. People were told that whoever even touches the arc would die. By this time the laws were common knowledge and their display was unnecessary. Whether or not Moses still lived is impossible to tell.

And the exodus? Archeologist are pretty sure that the entirety of the Jewish people had never lived in Egypt. It is also impossible for the biblical events that let to freeing the slaves to have happened without Egyptians writing about them. However, I believe that there was an exodus from the hillside of the Sinai peninsula. Abraham’s original name Abram רום אב  actually means “father of the high” (Abraham means “father of the many”). Torah returns again and again to the Mount Sinai or Mount Horeb. There is no reason to refer to your once holiest place of worship when it is outside your current habitat unless you grudgingly admit that it was somewhere else. The above mentioned land of Midian, the land where Moses lived and married, is believed to be in modern day Saudi Arabia! There are many reasons to believe that the homeland of the Jews was this southern tip of the peninsula between Egypt and Midian. And it is from this hillside that the law is taken, symbolically placed into a chest (ark of the covenant) and taken to a new Temple on a new hill. Before the chest became physical, the law was the law and the people were the people because of their customs and rules which they took with them. Was it Moses, the guy who introduced the ten commandments, also the man who asked his people to leave Sinai?

I don’t know that. I do assume that trade between Egypt and the Hebrews, interaction and population exchange was common because of the location. A Jewish king could have bought a substantial number of Egyptian slaves and freed them. If the man who freed the slaves and the man who simplified the law was the same person is impossible to say, but they were both libertarian spirits.

One thought on “Moses Actually Existed”